You call your local hvac company out to your home or business because it isn’t cooling and they come back and tell you the bad news that it won’t cool because you have a “bad compressor”. Okay….what does that mean? A “bad compressor” could mean that it has failed the one thing it is suppose to do and that is compress refrigerant vapor into high pressure, high temperature vapor. That’s it, it’s single purpose in life is to compress, and now you tell me it can’t even do that? Yes, cause it went badddddd, it’s a badddd compressor. All kidding aside, a failed compressor is one that won’t compress refrigerant because of an electrical or mechanical failure. Let’s talk about electrical failure.

Electrical failure could be an open or broken motor winding, a temperature sensitive overload switch that won’t reset and close, or an internal electrical ground. Either of these are bad and means that the compressor has to be replaced or the outdoor unit (condenser or heat pump condenser) needs to be replaced. The compressor is constructed of an electrical motor turning a piston or scroll assembly to intake low temperature, low pressure refrigerant and mechanically compress it into a high temperature, high pressure refrigerant gas. The condensers job is to take that high temperature/pressure refrigerant and condense it into high pressure liquid to be used by the indoor evaporator coil. This is a very simplified explanation…. So if the compressor can’t compress it is no longer a working compressor. An electrical failure I want to explain and show pictures of is a grounded compressor.

An electrically grounded compressor is one where the internal motor windings have lost their insulation and voltage is not being used for electromagnetic force of causing the rotor to spin mechanically but is now shorted or gone to ground. This is measured in ohms of resistance and this conductivity indicates an electrical fault that “leaks” electricity out of the motor winding straight to chassis, cabinet, to earth ground. This is what trips breakers and blows fuses to keep the circuit from shocking someone or causing an electrical fire. This is a bad compressor.

A mechanically failed compressor is one that has lost the compression ratio and is called a weak or “bad valves” compressor. It is spinning and making noise but can’t compress refrigerant vapor.  This is indicated by equalized refrigerant pressures or the inability to maintain the proper compression ratio. Sometimes the internal relief valve opens inside the compressor and won’t reset. Either way this is an example of a “bad compressor”  Another mechanical failure is a bound or “locked up” which means it can’t spin the piston or scroll assembly. This is indicated by high amperage or “locked rotor amps” close to the LRA rating of the compressor. A residential mechanically bad compressor has to be replaced because it is a sealed assembly and cannot be rebuilt, many commercial compressors in large BTU systems can be rebuilt.

The example I’m going to show you is a compressor that experienced high pressure and temperature, weak run capacitor and low refrigerant level. This created high amperage which caused the wire connector to get very hot and melt which looks like a burnt wire end. When this happened the compressor stopped operating and drew high amperage and tripped a circuit breaker. When the wire terminal melted it arched the spade connector on the compressor terminal and damaged the connection point. The terminal post can’t securely hold another wire because of the damage so a “lug kit terminal” is about the only repair option. A picture of the compressor terminals shows the S T2 or start terminal burnt off and the bottom R T3 or run terminal has a “lug kit terminal” attached.  The next picture is a wire end that is burnt and the end of a normally exposed wire for comparison. Previously when this compressor burned the R T3 run terminal connector, a “lug kit terminal” was installed but the compressor also indicated conductivity or a ohm reading to ground. It was a high ohm reading yet the compressor when repaired was able to operate and cool the home until….. it finally went bad. When it did burn the start terminal wire it also ground out and arched an internal hole in the terminal area and blew all the refrigerant out of the compressor. This is a bad, bad, bad compressor because it destroyed its ability to hold and compress refrigerant. A new outdoor condenser is the only reasonable solution for this repair because of the age, efficiency and type of R-22 refrigerant it used.

So I hope this explains in some general terms what comprises a compressor failure and the pictures allow you to see what has only vaguely been described by your hvac contractor. 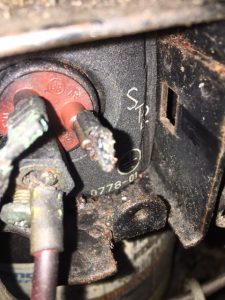 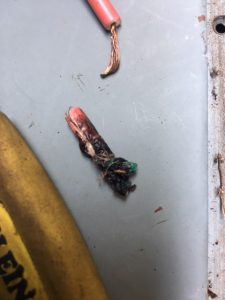 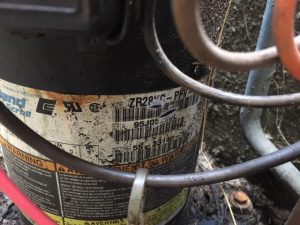